All we need is a scoop of love, the rest we all make up.

Niek van den Adel’s mindset earned him the nickname ‘Mr. Featherforce’, the literal English translation of the Dutch version ‘meneer veerkracht’. Indeed, Niek van den Adel is the resilient speaker of the moment. And we’re going to need that resilience more and more in the future if you ask him.

“Resilience is necessary to cope with the great challenges of our time. Climate change and the enormously high workload, for example.”

The good news is: resilience is (partially) developable. A loving environment, a healthy body, going outside a lot, the language you speak to yourself, doing things that are meaningful, your coping mechanisms, humor; all elements that have been scientifically proven to help develop resilience.

“We are a collective burnout in the making.”

Resilience is vital, not only for the individual, but also for organizations and society. After all, things like the level of workload and change and innovation power rely entirely on the resilience of employees and citizens.

In his lectures, Niek van den Adel combines his unique personal experiences, research findings and psychology, so that listeners go home not only inspired but also activated, and with clear tools.

Niek van den Adel’s mindset earned him the nickname ‘Mr. Featherforce’, the literal English translation of the Dutch version ‘meneer veerkracht’. Indeed, Niek van den Adel is the resilient speaker of the moment. And we’re going to need that resilience more and more in the future if you ask him. “Resilience is necessary to cope with the great challenges of our time. Climate change and the View more…

I laid on the street for 3 long hours. Do you think I was thinking about my career or how much money I was making?

"We all want an earth worth living on, but perhaps we should turn it around; make ourselves worthy of the earth."

Even in the deepest valley you can find a good deal of happiness.

This statement by Niek van den Adel is anything but an empty slogan, but something he himself experienced to the depths of his being. Before that one fateful day, he was mainly occupied with his career, “being a consultant, in a nice tailored suit,” as he described it himself. But when he was twenty-eight, this lifestyle came to a hard end. He goes down on his motorcycle…

“I laid on the street for 3 long hours. Do you think I was thinking about my career or how much money I was making?”

He suffers a high spinal cord injury, with a very painful tube formation in the spinal cord. A tough process follows and it is certain that he will spend the rest of his life in a wheelchair.

But despite – or perhaps because of – this long process, a whole new world opens up for him. Niek van den Adel feels the essence of being human again and works hard to even see his accident as a gift. Something he could never have imagined shortly after his accident.

So how is it that – despite his physical situation remaining unchanged – he began to feel happiness in life again? Awareness of how beautiful the world could be. There is only one answer to that if you ask Niek – resilience!

“Most people only ask themselves in the last 10 years of their lives: was it worth it? I’m lucky because I still have a whole life ahead of me.”

Niek van den Adel finds the love of his life in his occupational therapist and has 3 beautiful daughters with her. Moreover, he realizes that as a consultant, as well as a former hospitality guy, he worked with people all day, but actually knows very little about people…

So he begins to study psychology and NLP (Neuro Linguistic Programming). He also dives into the world of personal development – reads what there is to read and visits every guru who deals with it. After all, what exactly is resilience and how does it work? He discovered that you can develop resilience if you want to and experienced the impact it has on his happiness firsthand.

“Happiness is not in your legs, but between your ears!”

His inexhaustible enthusiasm and his beautiful, raw stories about resilience do not go unnoticed. Niek van den Adel is gradually emerging as an inspiration to others. He wrote the books ‘Zet de patiënt op 2’, ‘De lamme leidt de blinde’ and the bestseller ‘Crash’, which garnered a lot of media publicity. Meanwhile, Niek speaks at more than a hundred (corporate) events every year.

“I want people to cry from laughing and laugh from crying. I want my story to stay with them and for them to see that mental resilience is everything. That it helps both themselves and organizations to deal with change.”

In his lectures, Niek van den Adel takes people back to the essence of a happy life, regardless of whether they work in healthcare, business services, government or whether they come to listen to him in a personal capacity. Because he said so himself, “Caring and loving each other should be the norm for everyone. We all want an earth worth living on, but perhaps it is time we make ourselves and our organizations worthy of the earth.”

Why invite Niek van den Adel as a speaker for your event?

Niek’s biographical story is one about resilience, it is lived through. Inspiring to hear what mindset does to you and how to develop and train more resilience.

Inspiration is great, but what are you going to do with it? This is why Niek not only gets you thinking, but also stimulates you to literally step outside and offers practical tools to do things differently from now on.

We live in a time where we have more opportunities than ever to connect, and are less connected than ever. Compassion, hospitality, customer focus are the key to taking ownership of the future, according to Niek.

Niek stands – ironically – with both feet on the ground. With vulnerability, down-to-earthness and humor, he conquers the hearts of his audience. For example, every year he celebrates “Long Shall They Laesie,” because his spinal cord injury has also brought him very good things.

Does resilience ensure that you never have a bad day? As long as you are kind to yourself you will always be happy? Well, no. Niek’s message is not always comfortable, but it is realistic and well-founded. Together with his team, he conducts the largest resilience research in the Netherlands. What effect does it have, for example, on our mental state, sleep or even language? 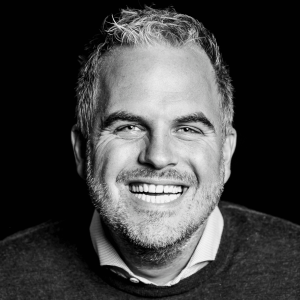 For Good: what does that mean to you?

“That I’m contributing to something bigger than myself. I hate the phrase ‘making the world a nicer place,’ but yes, that’s basically it. I’m single-handedly trying to save the world; after all, we only have one. I do that by doing things that contribute to my own well-being and that of as many people around me as possible.”

“I make people resilient and organizations agile so that they remain of value on an earth worth living on. I want my story to stay with them so that they can move and deal with the changes that are coming. If I have inspired and activated people, with tools they can get started with right away, then I am satisfied.”

Who is your greatest role model or inspiration?

“Nelson Mandela, for sure. Last year I was completely impressed by ‘The Book of Joy’ by the Dalai Lama, now I’m totally into Tony Robbins again. I also find ‘The Shift’ by Wayne Dyer very inspiring.”

What do you love and what is typically Niek?

“I’m a real optimist. I also think I’m quite lazy, which I like, but maybe my wife thinks otherwise, haha. I love nature immensely, going outside. Actually, we are quite strange creatures for voluntarily choosing to sit in little cubicles inside.”

What can audiences expect from you?

“I want people to cry from laughing and laugh from crying. My wish is always for people to tell each other in the car going home that they had a special day that they will talk about for a long time.”

Niek’s keynotes: what can he do for you?

Niek can draw on 15 years of hospitality experience. From dishwasher to cook, from waiter to host, from café to starred restaurant, from cleaner to owner. In his role as inspirator and keynote speaker, he enjoys telling stories about what we can learn from the hospitality industry. What is service – and is it still of our time?

Niek’s story is not just another story of someone who had an accident and saw the light. It is a story of love, pain, dead seed, strength, a puppy, hospitality, perseverance, humor and success. Niek’s story is one that has already provided inspiration to thousands of people – and hopes to reach many thousands more.

The term ‘inspirational leadership’ seems to imply that a leader’s purpose is to inspire individual employees. A noble aspiration perhaps, but is that the leader’s only added value in the bigger picture? And why can’t employees inspire themselves? How do you properly fill your role as an inspirational leader?

“I remember being angry, being sad, resenting everything and everyone and wanting to keep everything as it was.” That strategy didn’t bring Niek much, however. Only more anger and sadness. But why did he and many others succeed? Why do some people and organizations cycle through change like it’s nothing?

Niek shares his 5 success factors, so you can start using them tomorrow. After all, it doesn’t matter if it’s a change at work, if the coffee maker is moved, your workplace or your work content. Resilience, moving with change, is a muscle you can train.

Nobody started working in healthcare for the rules and protocols. People in healthcare want to be meaningful to others, and that is exactly where the potential profit lies. It actually sounds very logical, right?

Niek always works from the patient-practitioner-family triangle, where the three have to be in balance. But how do you get a triangle in balance?

How do we get it together so that, despite all the changes, everyone continues to enjoy the excellent healthcare we have in the Netherlands? How do we get that nice atmosphere back on the ward and ensure that patients continue to choose your healthcare facility? How do we involve the environment and family in the care process?

A selection of companies that Niek van den Adel already had impactful collaborations with….