“The best way to predict the future is to create it.”

Peter van der Wel is an economist, futurologist and a wanted speaker – because after all, the future concerns all of us

“The best way to predict the future is to create it”, Abraham Lincoln once said. This statement is Peter’s personal mantra. It hits the spot because as a futurologist, Peter van der Wel is concerned with creating ‘The Good Future’. His message to us is to not be afraid of the future.

“By exploring the future in the present, by anticipating and acting on our ideals, we can shape a better world for ourselves.”

Before becoming a futurologist, Peter van der Wel was an economist, now with a rich resume. And by now, his resume has grown substantially. He worked for large corporates, but also for several small and medium-sized enterprises, non-profits and governments. For eight years, he was the director of the EPN Foundation, which promotes IT that makes social impact and to which the Safe Internet Foundation (SIF), the Dutch Institute for Telemedicine (NITEL), the Information Society Platform and the Virtual School Platform are connected.

Peter van der Wel is director of FutureVision and author of, among others, ‘Economie voor wereldverbeteraars‘, ‘Toekomstverkennen‘, ‘Impact‘ and ‘De toekomst is al begonnen‘. He is currently working on a new book: ‘50 lessen van de futurologie‘. He is also a sought-after speaker, which shows how much the future concerns us all.

In his lectures, he takes people on a journey to the future and shows that futurology does not concern a crystal ball – it is science. By learning to think in terms of systems and exploratory scenarios you can make quite accurate predictions about the future.

He also paints a picture of a better future, partially due to the technological solutions that are out there already. But this is only possible when we break through our own limiting thought patterns and increase our imagination. Peter van der Wel explains how.

Peter van der Wel is an economist, futurologist and a wanted speaker – because after all, the future concerns all of us “The best way to predict the future is to create it”, Abraham Lincoln once said. This statement is Peter’s personal mantra. It hits the spot because as a futurologist, Peter van der Wel is concerned with creating ‘The Good Future’. His message to us View more…

"Climate crises, pandemics, wars. Many people are afraid of the future. I strongly believe in 'the good future'." 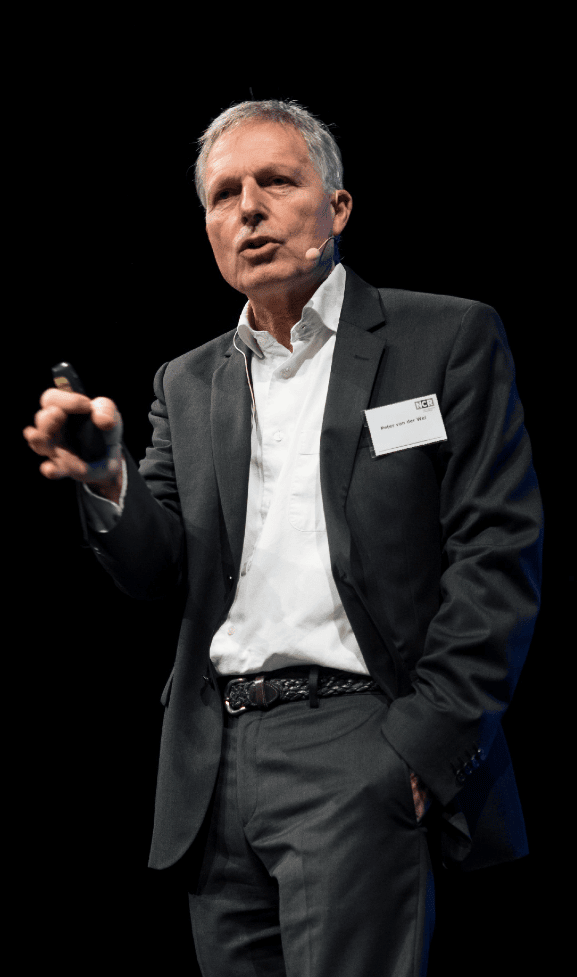 "Everyone knew it couldn't be done, until someone came along who didn't know that."

Futurology makes us believe in the impossible

How is it that every serious futurologist predicted a pandemic years ago? Or a new economic crisis? What do they know that we don’t and why do events like these surprise us?

“There are some established statistics that recur in a cycle. ‘7 fat years and 7 lean years’ is not just a statement, the phenomenon is quite logically explainable.”

As an example, Peter van der Wel mentions the economic cycle, but also the the ‘S-Curve’ growth model, a growth chart for the adoption of technological (product) developments. It illustrates that developments always show a temporary exponential growth. However, us humans don’t have the capacity to think exponentially, which is why innovation surprises us every time.

“Futurology makes us believe in the impossible. Television, for example. In 1950, how many people could have imagined having one of those strange ‘boxes’ in their living room? Ten years later, 10 percent of all households owned a TV. And a decade later, 80 percent.”

History teaches us how the world developed into the way it is today.

“For example, there was a time when we couldn’t have imagined the end of slavery or communism. Or the introduction of women’s emancipation. Now we can’t imagine the opposite.”

Fear also inhibits us from being able to imagine the future, according to Peter. And this despite the fact that in general – if you look at social developments over a longer period of time – our lives have been improved. Peter van der Wel predicts that in the future we will be able to do more with fewer and fewer resources, which will change the way we live and work.

Should we be afraid of, for example, robots ‘taking over’ our jobs? If it is up to Peter, the answer is no:

“The nature of our work will change and it will lead to more free time. We will recognize that happiness in life does not depend on our consumption behavior, but on how we connect with others and how we are meaningful to each other.”

According to Peter, that is where the key to creating a better world together lies.

A lecture by Peter van der Wel is a surprising visual experience. Would you like to book him as a speaker for your event? Add him to your selection of speakers or book directly. Contact us for more information on the possibilities and his availability.

Why should you invite Peter van der Wel as a speaker for your event?

The lectures and masterclasses of Peter van der Wel offer both policy makers and entrepreneurs perspective on how to deal with and anticipate future developments, through systems thinking.

The looming climate crisis, robots taking over our work, polarization in society, war. We are often afraid of the unknown which always lies in the future. Peter explains how foresight and anticipation can lead us to ‘the good future’.

As difficult as it may be to imagine, we as humanity have a shared ideal of civilization and a shared future. Creating a better world is something that we should do together. Peter explains how embracing futurology can help with that.

Futurology is humbling, it shows how little influence we have on the major driving forces of change. At the same time, Peter emphasizes that by examining future scenarios we can actually deflect in a new direction. As a society, but also as individuals, we do have an impact.

Futurology interfaces with many domains and disciplines. Peter’s lectures are therefore applicable to any audience, but are adapted to your specific industry and challenges. 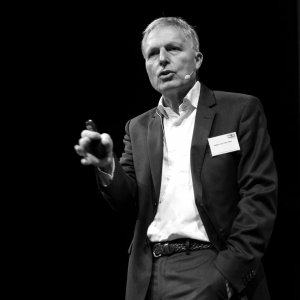 For Good: what does it mean to you?

“As a futurologist, I want to contribute to a more sustainable, fairer world. And I also truly believe that this is possible; creating a future that is good for all of us. My lectures are therefore not only entertaining and informative, they are also a wake up call – activating people to start thinking about the future in the present.”

“That is undoubtedly my diverse background, I am an economist as well as a futurologist and have accumulated a lot of knowledge and experience over the years in both areas. I tell and show what the future has to offer, and back this up by sharing knowledge and practical examples. I have 30 years of experience as a speaker, but also as a consultant. This has allowed me to glance into the kitchens of countless organizations and see how they deal with certain challenges. I tap into these practical experiences and vibrantly share them with the audience.”

Who is your greatest example or inspiration?

“Buckminster Fuller is my hero. Architect, inventor, philosopher and futurologist. He coined the phrase ‘Spaceship Earth’ to describe our planet. He saw the earth as a spaceship, with humanity as its crew. Only by working together we can control it and make it work. He was a great visionary.”

What do you love and what makes you typically Peter?

“I love a lot of things. Walking with my dog, taking the camper out on the road, reading about something new. But my life fulfillment comes from connecting with people. It’s a day well spent if I’ve had a nice conversation with someone. For the things and people I love I always make time.”

What can the audience expect from you?

“It makes me happy when I am able to inspire people. When my insights on futurology haunt their minds for a long time. And that they realize futurology is not looking into a crystal ball, but science. I like to talk to people in the audience afterwards, to hear what valuable insights it has provided for them.”

Would you like to book Peter van der Wel as a speaker for a conference, lecture or event? Here you can find a selection of Peter’s keynotes. Would you prefer a custom made program? Ask for the possibilities.

During this lecture, Peter will show how existing technology can eliminate 90% of all emissions of harmful substances and greenhouse gases within 15 years. That is much faster than agreed in the Paris Agreement. And this does not require draconian measures and we will not see a drop in prosperity or standard of living. On the contrary, these transitions will generate a lot of new prosperity. The beauty of it is that these transitions are already underway and are simply a consequence of economic and technical laws. We can either stimulate or slow down these transitions. The choice is ours.

And it doesn’t stop there. To make it even more beautiful, many other problems will also disappear by extension. In this way, we can also accelerate the realization of the 17 SDGs of the UN. Finally, for everyone on earth good basic facilities, good education, good medical care and a good living environment.

You often hear that the world is changing faster and faster. However, this is only partly true. Only those who do not look ahead enough are overwhelmed by the events that are coming our way. This is true for the climate problems, the nitrogen problems and it was also true for the recent problems with COVID-19. Many people and organizations do not look ahead enough. How can you learn to look into the (still uncertain) future? What are the possible, probable, desired and unexpected futures? In this master class you will learn the 100 lessons of futurology that will help you to see the future better and to make better decisions in the present.

Of course every masterclass is tailor-made. Both in terms of content and format Peter tunes his masterclass in consultation with the client to the desired objectives and the participants.

A selection of companies that Peter van der Wel already had impactful collaborations with….