“It’s pointless to spend time and energy on things that don’t contribute to a better world.”

Companies that do not move along in the sustainability transition have no reason for existence if you ask Leen Zevenbergen; “Only sustainable thinking will survive!”

Leen Zevenbergen is founder of the first Artificial Intelligence company in the Netherlands: Bolesian, which he later on sold to Cap Gemini. He then left for Silicon Valley to once again work at a bleeding edge company: Electrogig. Back in the Netherlands he joined the boards of PinkRoccade and Origin and founds the first internet e-business company Escador. He also started lecturing about his experiences and adventures in Silicon Valley.

In 1997, Leen’s life and entrepreneurship reaches a tipping point. At the recommendation of his commissioner Eckart Wintzen (author of Eckarts notes), he connects with Ben Cohen – founder of Ben & Jerry’s and a devoted philanthropist.

“Everything changed for me back then. From this moment on, my focus was no longer on profit and growth, but on creating a better world, in the present but also for future generations. I decided to dedicate all my time, talent and energy to this.”

So he joined the Social Venture Network – the oldest network of sustainable entrepreneurs. On top of that, together with his friend he founded B LAB Europe, an NGO dedicated to changing the economic system with B Corp certifications. With these, companies declare that they meet high social and sustainability standards, for which they are held accountable.

He wants to improve the world by creating awareness of what people can achieve by stepping outside existing frameworks. He loves lecturing about this subject almost as much as he loves to talk about his walnut farm in France…

Companies that do not move along in the sustainability transition have no reason for existence if you ask Leen Zevenbergen; “Only sustainable thinking will survive!” Leen Zevenbergen is founder of the first Artificial Intelligence company in the Netherlands: Bolesian, which he later on sold to Cap Gemini. He then left for Silicon Valley to once again work at a bleeding edge company: Electrogig. Back in the View more… 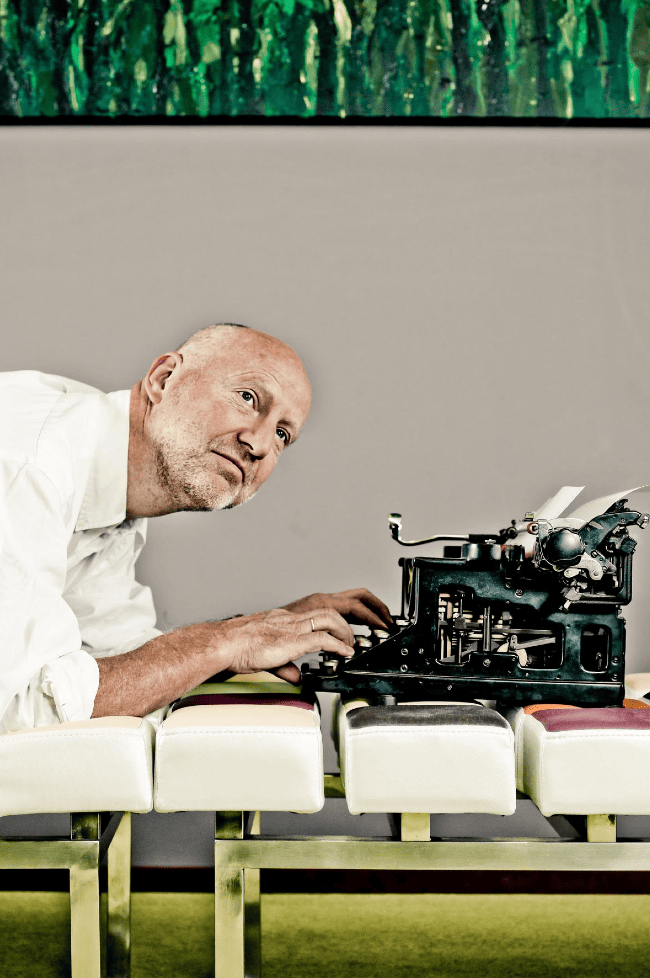 "I'm very straightforward. For example, when I ask my audience who invests in Coca Cola? I don't hesitate to explain why I think that’s a bad idea."

The pace of change is determined by passion

In his career, Leen Zevenbergen experienced how much resistance there is within listed companies when it comes to sustainability. This inspired him to write the book ‘Sustainability @ the speed of passion’, based on his experience that real sustainability can only be achieved if the leaders of a company are genuinely motivated.

Despite the fact that more and more companies seem to be turning into purpose-driven organizations, their story is often just a paper-thin layer that Leen Zevenbergen scratches off easily.

“They’ve read a book and – although the intention is often good – tell a story without substance. It’s only about CO2, for example, but you can’t separate this from the total sustainability issue. Water scarcity, biodiversity, climate change. It’s all interrelated. This demands a holistic approach.”

Leen doesn’t sugarcoat his message. He breaks taboos and is realistic.

“The established order is blocking sustainability. My resistance is just enough to get something going, but at the same time I make sure to get people on board.”

He also believes that major social issues are not in the hands of citizens and entrepreneurs, but mainly in those of large corporates. Excluding them because they don’t change fast enough is counterproductive.

“We are already behind on the sustainability transition, so we need all the help we can get and start working together.”

Leen’s agenda is set by the United Nation’s 17 Sustainable Development Goals, along with his own personal Earth Overshoot Day.

Book Leen Zevenbergen for your next event

Would you like to book Leen Zevenbergen as a speaker, chairman or moderator for your event? Ask for the possibilities and his availability.

Why should you invite Leen Zevenbergen for your event?

Leen speaks for companies that are intrinsically motivated to make sustainable, social impact. Whether these are B Corps that want to continuously improve themselves, organizations that are on their way to becoming a B Corp and want to inspire their employees, or companies that are just at the beginning of their transition. A changed mindset is the first step.

2. A variation of keynotes and formats

You can book Leen as a chairman, moderator or speaker. A lecture lasts from 15 minutes to two hours and a workshop or other interactive format is also possible. From large conferences to three-day core sessions at Leen’s walnut farm in the south of France.

Leen has decades of experience as a speaker in the field of sustainability, innovative technology and daring entrepreneurship. He has guided many companies on their path to sustainable entrepreneurship, drawing from his knowledge of technological development, such as virtual reality (VR) and artificial intelligence (AI).

His real-life stories are authentic, inspiring, full of humor and appeal to the imagination. Leen is a born storyteller and knows how to surprise, entertain and move his audience, while not being afraid to kick over sacred cows.

Leen’s lecturing style is based on his ‘no bullshit’ attitude. Entertaining and telling a fascinating story is one thing, but he actually wants to set something in motion. A mind shift that puts his audience into action mode. Because he himself has guided countless sustainability transitions and still does on a regular base. He is familiar with the challenges, but also with success stories as a result of a pragmatic approach.

For Good: what does it mean to you?

“I believe that everything you do should contribute to a better world. I even think that this is the only way for a company to claim its right to exist in the future. How do you deal with employees, customers and the environment? What is the purpose of your product or service? How is your product produced, under what conditions and what raw materials are needed? Treat your stakeholders like you treat your shareholders, or even better!”

“I put all the facts on the table and I’m realistic. Not everything can be solved. For example, fully controlling global warming is an illusion. We have long passed the 1.5 degree Celsius mark. Tragic, but that’s just the way it is. This must, however, be the new starting point. I also confront people when necessary. For example, I sometimes ask who invests in Coca Cola, and then explain why I think that’s a bad idea.”

Who is your greatest role model or inspiration?

“Ben Cohen from Ben & Jerry’s of course and Anita Roddick of the Bodyshop. Both of them are also co-founders of the Social Venture Network. Other sustainable entrepreneurs from this network inspired me as well. Some of them were actual hippies, but I discovered that they were quite smart, fun people who were not so much concerned with profit, but mainly with creating a better world. This opened my eyes at the time. Currently, I used to be the European President of the Social Venture Network.”

What do you love and what is typically Leen?

“There are only a few entrepreneurs who have founded this many companies and experienced as many highs and lows as a I have. So my entrepreneurial and life experiences are pretty distinctive. However, Thomas van Zijl enjoys announcing me as ‘the walnut farmer’, when I make an appearance on BNR News Radio.”

What are your goals for the future?

“To leave the world in a more beautiful state than how we found it, and try to achieve this on a global scale. By giving lectures and advising boards, preferably from my farm in France!”

Would you like to book Leen Zevenbergen as a speaker for your event? Here you can find a selection of his most popular keynotes. Please also inquire about the possibilities of a customized program.

1. The implementation of the SDGs

In 2015, as a follow-up to the Millennium Goals from the year 2000, seventeen goals were defined to be achieved by 2030. Only now is this beginning to permeate commercial and government organizations. Late, but better late than never. What are those 17 SDGs? Can they be ranked? And why are they there at all? What are the goals that are being pursued, and which ones are appropriate for your organization? And how do we implement them in our existing KPIs?

Leen will gladly take on this expedition together.

Most people are just not (yet) engaged in sustainability, because in their eyes it’s expensive, quite elitist and just not fun. And while almost everyone aspires to have a nice life with a good future for their children. And while almost everyone likes to do something for others from time to time, eat healthy, have a nice job and be surrounded by nice people. The keynote ‘Dominee van de Duurzaamheid‘ has the ambition to make sustainability normal, less elitist and even fun. Leen takes us into a world that can be heaven on earth, provided we take a few steps together towards improvement. Steps that are not difficult, but are urgent.

3. Once Upon A Future

Looking at everything happening around us in a holistic way. A description of all the major disruptions of the moment in a coherent overview. The changes in our society and your role in it. Based on the bestseller by Leen Zevenbergen and Ruud Veltenaar.